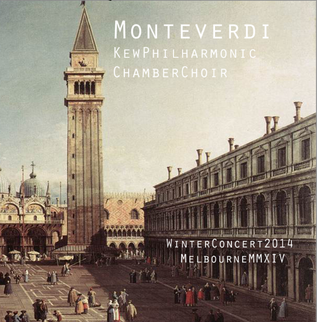 With those words of scathing criticism, Artusi helped define the beginnings of the baroque. In his discourse, Artusi, as an avid devotee and defender of his conservative teacher Gioseffo Zarlino (1515 - 1590), singled out a madrigal from an unnamed composer entitled Cruda Amarilli and used it as an example to show that modern composition was "...harsh to the ear, rather offending than delighting it...".

It wasn't until 1605, with the publication of his fifth book of madrigals that Claudio Monteverdi outed himself as the composer for the first madrigal in that collection which was Cruda Amarilli. Monteverdi enclosed in the dedication a short, even tempered reply to Artusi:
"...to show what I do is not done by accident. As soon as my reply is copied out it will be published under the title Seconda Pratica, overo Perfettione Della Moderna Musica. Some people may marvel at this, thinking that there is no other practice than the one taught by Zarlino but they can be sure that, with regard to consonances and dissonances, there is yet another point of view which defends modern compositional practice to the satisfaction of both the mind and the senses."
-- Claudio Monteverdi, from the dedication to the fifth book of madrigals.

Our program today attempts to show Monteverdi's relationship with both the prima pratica of the renaissance, epitomised by Palestrina and advocated by Artusi, and the seconda pratica that Monteverdi himself was having a direct hand in developing - musical practices and techniques which continue to be used today. We open with the introductory toccata and prologue to the first "successful" opera L'Orfeo, written in 1607. According to the conductor Nikolaus Harnoncourt, even though Monteverdi didn't create any of the forms and devices used in the opera, such as aria and recitative, "he blended the entire stock of newest and older possibilities into a unity that was indeed new". The ritornello that punctuates each of the five verses of the prologue is also a very early example of operatic Leitmotif as it is used to symbolise the "power of music" throughout the opera.

‘Ecce sacrum paratum’ was published in Ghirlanda sacra in 1625. The freely invented text of the motet combines images of the celebration of Mass and the Last Supper. Monteverdi’s setting is an arresting example of rhetorical solo song which mixes declamatory parts and short aria style passages. The madrigal, Interrotte speranze, was published in 1619 as part of the seventh book of madrigals. It features many features of the seconda pratica such as a focus on word painting, unprepared dissonances (the likes of which Artusi complained) and a strong reliance on homophonic texture. Despite the angst-written text that the music is set against, the use of a joyful polyphonic texture at the end is an example of musical irony.

The Magnificat Secondo, Messa da Capella and the Salve Regina III were all published in 1641 as part of a large collection of sacred music called Selva morale e spirituale (Moral and spiritual forest). This collection was Monteverdi's most significant liturgical collection since the Vespro della Beata Vergine 1610 and continued to utilize and develop the techniques of "modern composition" such as concertato, elaborate and agitated vocal writing and as exemplified by the Salve Regina III, alternating solo passages accompanied only by a basso continuo that highlight and dramatise the text. Both the magnificat and the mass are interesting in that they show a return to the techniques and ideals of the old style - especially at such a late stage in Monteverdi's career. The practice of using a chant as a cantus firmus to tie the other polyphonic lines together is a technique that was routinely practised in the middle ages. It is also a technique that Monteverdi partially deployed when writing the magnificat. Heard between each section of the magnificat is a chant that Monteverdi quotes in fragments throughout the polyphonic sections with the first instance being the first five notes of the work sung to the word "Magnificat".

The Messa da Capella is a work that aligns itself much more to the aesthetic of Palestrina with its strong use of contrapuntal texture and prepared dissonance than Monteverdi's own later style. The mass is held together with common thematic lines and motives that recur in slightly altered forms throughout. Monteverdi does not however, completely abandon the dramatic instincts he had honed over his long career. Clever shifts in texture, changes of mode and time draw out and emphasise the more dramatic elements of the catholic mass without sacrificing the reverent nature of the music.